Examining the “Gray” Area: On the Outside Looking In

Yesterday, all my social media feeds were flooded with video footage of Pastor John Gray’s latest appearance on Sister Circle TV. When I saw that he was trending (again), my first thought was, What has #BlackTwitter found now? I love us, but we can dig into other people’s business like nobody’s business!

If you read this blog, you know that Pastor John and his wife, Aventer, are one of many couples that I admire. After watching John’s clip, I respect them even more. For those of you who disagree, read on and hear me out.

In the now-(in)famous 59-second clip (watch below), Pastor John honors Aventer, saying, “The wife that I chose is better than the man that I am...She’s had to cover me while I grow up.” That part of the conversation raised a few eyebrows, but it was what he said next that caused a social media uproar. He said, “My wife has endured more pain birthing me than both of our children.”

I can see how this could be interpreted as toxic masculinity, misogyny, and even an Oedipus complex, but let me explain what I think he meant by it. Actually, before I give my interpretation, I’ll insert a screenshot of Aventer’s Instagram response for further clarification:
  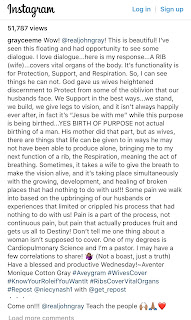 Now, let me ground this biblically. Genesis 2:18, 21-22 says, “The Lord God said, ‘It is not good for the man to be alone. I will make a helper suitable for him.’...So the Lord God caused the man to fall into a deep sleep; and while he was sleeping, he took one of the man’s ribs and then closed up the place with flesh. Then the Lord God made a woman from the rib he had taken out of the man, and he brought her to the man” ‭‭(NIV‬‬). This was profound to me because as I read and reread it, I realized something: Men really need women. Genesis 2:18 says, “It is not good for the man to be alone” (NIV, emphasis mine). Nowhere in there does it say it is not good for the woman to be alone. I’ve always said that everyone has a purpose, a specific assignment to carry out. We are all a solution to a specific problem in the earth. In this case, the woman is the solution to a problem that the man has. Fellas, don’t take this the wrong way. I’m not trying to emasculate y’all here. What I’m saying is, there was a deficiency in Adam that he could not fulfill on his own. He, of course, could function without Eve, but the addition of her presence enhanced the garden and made it good. She was the favor factor, the missing link. Ladies, so are we! When “a man leaves his father and mother and is united to his wife, and they become one flesh” (Genesis‬ ‭2:24‬ ‭NIV‬‬), she assumes the role of rib and shields his heart from the outside world. She covers the core of who he is, the parts that only she and God can see, and helps him actualize greatness.

As a man’s rib, the woman was physically designed to fit him, but since he was created first, he may not necessarily fit her right away. This why Pastor John said Aventer is “two sizes too big” for him. She was tailor made for him, but she, as his wife, had to give him the grace to grow into who she needed him to be. Her love (and, of course, the love of Christ) shaped and refined him, but that doesn’t mean she settled. She didn’t just see his potential. She saw who she knew he already was in the Kingdom, and she chose to walk beside him.
‭‭
John Gray’s phrasing threw some people off, but I believe this is what he meant when he said Aventer went through birthing pains with him. She was helping him birth purpose! This does not negate the fact that Pastor John was clearly a broken man when they married. He admitted that himself, but he also said he didn’t understand how broken he was—which meant he couldn’t communicate that brokenness to Aventer effectively until she began to help him heal.

Ladies, in NO WAY does this make it okay for us to go out and try to fix broken men...and be careful who you label #RelationshipGoals! As we see, the grass isn’t always greener on the other side. However, this IS proof that wedding vows are nothing to play with. When Aventer stood before God and everybody and said, “I take thee to be my wedded husband, to have and to hold, from this day forward, for better, for worse, for richer, for poorer, in sickness and in health, to love and to cherish, till death do us part, according to God's holy ordinance; and thereto I pledge thee my faith [or] pledge myself to you" (The Knot), that agreement is binding! Sometimes that’s a good thing, and sometimes, it’s not. Either way, it entails honor. That means that when Aventer chose to have John as her husband, she had to hold him down...when it was good, bad, and ugly. She had to honor him whether he was the pastor of Relentless Church or the poorest man in town. Why? Because when she said those vows, she pledged her life to him—and here’s the part that so many critics are leaving out: When he said his vows, he also pledged his life to her. In that 59-second clip, we only heard about what she did for him. We don’t know the other side of the story of how he covers her, but he was also quoted as saying, “I’m gonna live the rest of my life to honor her.” I hope Pastor John is making up for lost time, becoming the man his family needs him to be...and I hope Aventer is not staying in a marriage that’s draining her. From the looks of her post, though, it seems like she’s got it covered (pun intended).

I don’t know what goes on behind closed doors in the Gray house, but I do know this: I pray that even in my singleness, God will dismantle the myth of the “perfect” man and send me the one whose heart I’m supposed to cover. I pray that He will give me the tools to simultaneously protect and be protected. I pray that regardless of the ups and downs my husband and I face privately, God will allow us to display honor, not so as to cover up dirt or scandal, but to keep people out of personal matters, especially when one or both of us is experiencing the vulnerability of growing pains.

Both the man and the woman should be working towards wholeness before walking down the aisle, but growth doesn’t stop when you get married. Growth is a continuous process, and marriage shines a light on the gray areas in your life that need improvement. When you get married, your struggles become your spouse’s struggles and vice versa. You work through issues together. Marriage is give and take, but what I see now is that it’s not always 50/50. Some seasons are 80/20, some are 60/40. The grace, the covering, is given to who needs it the most at the time. No outside questions should be asked, because most people are judging from the outside looking in. Now, can we please stop throwing stones inside of glass houses? I don’t know about you, but I’m tired of replacing shattered windows.
Posted by Siobhan McIntyre at 1:14 PM