Last weekend, I visited Upper Room COGIC in Raleigh, NC for their Wake Up 2 Life concert featuring Todd Dulaney, Kierra Sheard, and Zacardi Cortez. It was more than just a concert, it was the perfect praise smorgasbord, with some of everything: a little old-timey church from Zacardi, some sanctified swag from Kierra, topped off with an eclectic mix of acoustics, reggae, and contemporary worship from Todd.


In my concert reviews, I always mention how the "appetizer(s)" have to be en pointe in order to set the proper atmosphere for worship to flow. The appetizers this time left me so full, I almost didn't have room for the entrées — almost. The first few openers were local and semi-local artists from Durham and Charlotte, but they lit a fire under the audience and kept us on our feet, singing covers of songs like Micah Stampley's upbeat call-and-response hit, "Be Lifted" and a few others, setting the tone for a spirit-filled night. Just when I thought the appetizer round was over, Upper Room served up a pleasant surprise, their own Senior Pastor, Bishop Patrick L. Wooden, Sr. The man can SING. It's not uncommon for most pastors to at least be able to carry a tune, but Bishop Wooden is the real deal. He sang a few songs, including one or two that he wrote, and his incredible range — from clear falsetto to smokey baritone — kept first-time listeners like me interested.


Now, onto the three entrées — yes, plural. They were all so wonderful, I couldn't choose a favorite. First up was Zacardi Cortez. I'll admit, I was most excited to see him because I've been following his career for a number of years now. His voice on CD is out of this world, but hearing it live is a WHOLE different ball game. The Texas native started out joking with us about wearing boots under his church suit, but when he closed his eyes and belted that first note, "Let Your power fall..." everyone stood up and every hand lifted as the power of God literally fell over the entire congregation. By the first ridiculous (in a good way) run ("Prooo-ooooove the dooooubters wrooo-ooong!"), I was through, screaming "YES!" at the top of my lungs and swatting at him, all while trying to record. (I'm uploading the videos now. Let me apologize to my headphone users in advance 😂). I almost couldn't pull it together during his rendition of "The Blood," but I had to regain my composure for my absolute favorite, "1 on 1," from his 2014 album, Reloaded. Needless to say, "Cardi" definitely didn't disappoint.


Next up to the mic was Kierra Sheard. Can we talk about how "Kiki" and I are friends in my head? No, but seriously, she's so cool: always fashion-forward, body-positive (as a plus-size girl myself, I appreciate how she embraces her "thick"), and she's constantly dropping godly wisdom on her Instagram and her blog. And homegirl can BLOW. Her set catered to the younger crowd, and she invited tweens, teens, and young adults closer to the stage to rock with her — literally. After she apologized to the pastor for wearing pants (lol), we bopped through almost all the songs she performed, starting with "God in Me," the hip-hop-inspired feature she recorded with gospel duo Mary Mary, and ending with her latest crowd favorite, the uber-catchy "Hang On" with GEI. She even invited a young girl onstage to sing with her during "Hang On." To the audience's delight, the starlet-in-training, a member of Upper Room's youth choir, held her own and nearly matched Kiki run for run. Between the upbeat tracks, Kierra paused for a few classics like "I Love You (Lord Today)" and "In the Name of Jesus."


Last but certainly not least was Todd Dulaney. Before this concert, I didn't know too much about him, but I'm familiar with his 2013 single "Pulling Me Through" from the album of the same name. Also, I absolutely LOVE his current radio singles "The Anthem" and "Victory Belongs To Jesus." They are the reasons I purchased his latest album, A Worshipper's Heart, which released in 2016. After seeing him live, I'm definitely sold. Todd's "Worshipper's Heart" is evident in his music, and the songs he performed were a refreshing combination of acoustic and reggae-infused pieces. His set was the perfect blend of get-up-and-dance and lift-up-your-hands worship. It primarily showcased music from his most recent project. He (fittingly, since it was raining) began with "Dance In The Rain (Jump And Dance)" followed by "Free Worshipper," then transitioned into an epic three-part finale featuring his current hits "The Anthem" and "Victory Belongs to Jesus" (during which his background singers KILLED their solos! I've got goosebumps all over again!) and of course, the pièce de résistance, the ever-popular "Pulling Me Through." After the show, I got a chance to meet Todd, and if I wasn't already a fan, his humility alone would've sealed the deal (even if he did misspell my name when he signed my CD lol). Upper Room COGIC's Wake Up 2 Life show had something for everyone, kids and kids-at-heart alike. It was a praise party that left the hearts of all the worshippers full to the brim. 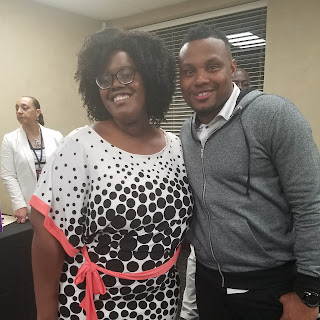 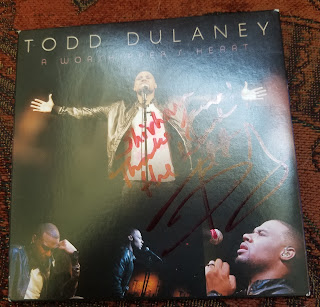 Posted by Siobhan McIntyre at 10:33 AM